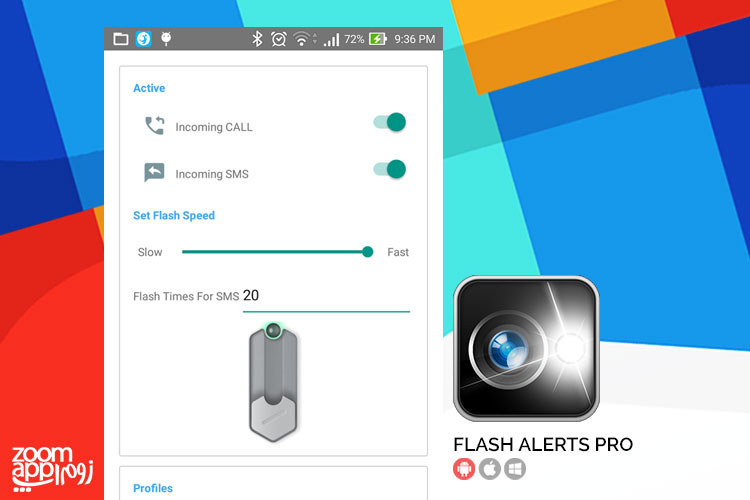 Flash Alerts PRO is an app for Android devices that lets you receive notifications with your phone’s flash blink. Stay with me.

Usually, smartphones have small LEDs which inform about upcoming calls, texts and other notifications. Most of the time colors are set by default in these LEDs, but thanks to developers, you’ll be able to change their colors with specific apps in the future. But in the meantime, changing LEDs` color wasn’t enough for some talented developers and they’ve decided to create a more interesting thing – using the phone’s flash instead of LED flashing light.

With this app, when you have a call or receive a text, your phone’s flash will blink just like LED light and inform you about that with bright light. If you’re tired of your phone’s LED light or you have one of those few phones that don’t have Notification LED, Flash Alerts app can take care of notifications perfectly. Although, unlike LED lights, you can`t change the color, but your phone will look very differently.

The thing that makes this app different from many other competitors is that it can be used in all applications. It means, unlike other similar apps that provide this feature only for upcoming calls and texts, Flash Alerts will let you know when you have a notification from Telegram, Instagram or your other favorite app. It’s not set by default, but to do it, you just need go to Settings after installing the app.

When you receive a call, the flash will start blinking; in order to make it stop blinking, press Volume button. Speed of blinking is adjustable in Flash Alerts’ settings. Also, you don’t need to worry about battery drain because thanks to smart settings of Flash Alerts, you can set it to turn off for the time you don`t use your phone (e.g. between 12am and 8am) or the battery charge is low.

Another interesting setting of this app is an ability to turn on or off due to silent or general mode of your phone. There are three available modes in the app’s settings: Silent, General and Vibrate. So you can set the app to turn on when your phone is in one of these three modes. For instance, if you turn it on for General mode and off for Silent and Vibrate modes, then your phone’s flash will start blinking while receiving a notification when your phone is in General mode, but as soon as you change it to Silent or Vibrate mode, flash light won`t turn on.

At the end I invite you to take a look at No Screen Off app if you want to know how you can keep mobile’s screen on while reading too. Hope you will install and enjoy Flash Alerts app and if you know any other interesting apps, feel free to share it in comments below!