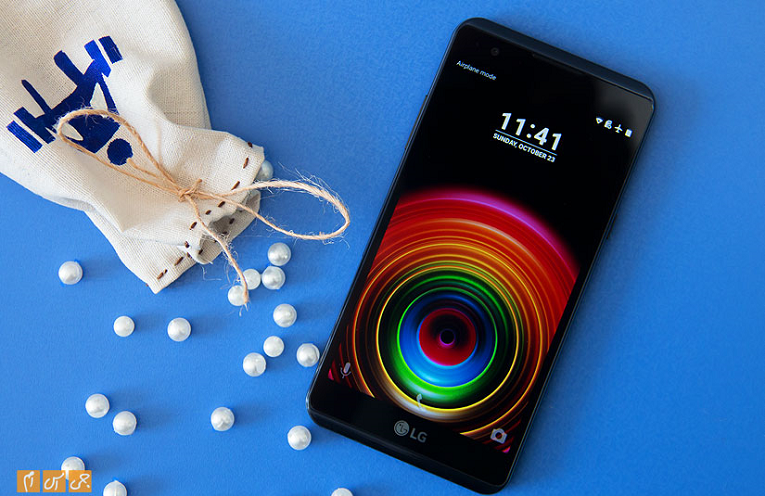 How is LG X Power? I’m going to review LG X Power today which developers focused on its powerful battery to make those users happy who don’t want to constantly charge their phone. New series of mid-range LG phones have X prefix. They have reasonable price and each of them is equipped to unique features which haven’t been seen much in other mid-range smartphones.

X cam model is equipped to a dual camera while X screen model has two displays and X power has a powerful battery. Actually, this mid-range smartphone has a 4100mAh battery which is enough for a 13-hour ongoing phone call and 550 hours in standby mode. Ok, let’s take a deep look at Review of LG X Power together.

X power has been released in two different versions: one with Snapdragon 212 processor for US market and the other with MediaTek’s MT6735 processor for global market.

As I’ve mentioned before, each LG smartphone from X series has a unique feature and we are not surprised to see a different design for each model. Powerful battery of X Power hasn’t affected phone’s dimensions and its 7.9mm thickness and 139g weight put it in the list of thin and light smartphones. It had been common to use plastic on phones until 2 years ago; but now, most brands use metal instead of plastic to make their products more resistant. Anyway, X Power`s body is still made of plastic what makes it different (and not in a positive way) from similar smartphones in the market. A 5.3-inch display covers about 69.4% of the front of the phone. The secondary camera, light and focus sensors as well as LED notification light are embedded on top of the display. There’s nothing except power button on the right side, and volume buttons and SIM card slot on the left side of X Power. The back cover is also made of soft-touch textured plastic. The positive side of this type of plastic is that it’s anti-slip. However, there is a negative side to it, too – stains will be visible on it after a while. Lens of the main camera with a flash is placed on the left side; it’s totally flat and does not have any bumps.

The edges of the back cover are curved a little what makes it more comfortable to take the smartphone in your hand. Unfortunately, LG X power isn’t equipped to a fingerprint sensor and it was better if LG considered new technologies such as a fingerprint scanner for this mid-range smartphone. X power`s display is 5.3-inch IPS LCD with HD resolution. Although you can realize that its resolution isn`t high at first glance, its affordable price lower our expectations for this phone. There’re two main issues about the display: Ambient light sensor’s performance is good and it adjusts brightness of the display according to environment light quite well. LED notification light (which isn’t normally available on mid-range smartphones) can receive and display all incoming messages and notifications. Like on other LG phones, it’s not required to press power button to activate it and you just need to tap on screen twice to enable it.

In the end, we shouldn’t forget about Gorilla Glass 3 Screen Protector which completely covers the screen, although it’s recommended to consider an additional screen protector for your LG X power if you want to be 100% safe. As I’ve mentioned before, X power has been released with different hardware for different markets. The official version for global market is called K220Ds and has Mediatek MT6735 processor which is considered as an average CPU and is mostly used in mid-range smartphones. The performance of this 1.3GHz Quad-Core Chinese processor is average. It’s equipped to 2GB RAM which is totally enough for a mid-range phone. About 900MB of RAM is dedicated to apps and 4GB of 16GB storage capacity is also inaccessible.

To check the phone’s performance, we’ve installed and tested Asphalt 8: Airborne game. It run well, but we also experienced dropping frame and lag. Then we adjusted settings and changed game’s quality to normal, and after that, the game run smoothly without any issues. In total, for several days we’ve tested it with different tasks such as running apps and games, web surfing and playing movies which are considered as general usage and we didn’t have any problem, so you can be sure that LG X power can perfectly handle your daily tasks. X power operates on Android 6.0. Its upgrade to Android 7 hasn`t been released yet. Version 5 of LG’s user interface which is used in this smartphone is familiar for LG users. The only issue with UI might be the fact that there’s no page for apps, however, it can be easily added manually in Settings. Camera resolution is the second difference of LG X power models released for different markets. It’s 8MB with lack of HD video recording in the US market and 13MB camera with HD video recording feature for global market. Its diaphragm is 2.2 and you can take quality pictures outdoors with enough light. Of course, it does not mean that photo quality is low at night or in dark environment, but flash light isn’t enough and also there’s no HDR either; so we can’t expect to take high quality pictures in the dark.

Camera menu is simple and has only important settings such as flash activation and mode switch from main camera to selfie camera. In general, camera quality is totally fine for a mid-range smartphone in this price range and according to its price you shouldn’t expect Ultra HD video recording from it. However, it’s able to record Full HD videos with 30FPS. Although there’s no video/image stabilization, recorded videos and taken images don`t lack clarity and have appropriate quality.

You’ll be happy to hear that LG X power is one of the most perfect mid-range smartphones in terms of communication capabilities. It supports all generations of telecommunication like 2G, 3G and 4G. It has hybrid SIM card slot which means you can use the slot for the second SIM card not only for its primary purpose, but increase memory by inserting a memory card. In addition, USB On-The-Go will let you easily connect your flash memory to LG X power.

Now let’s take a look at the most important advantage of LG X power – its battery. The 4100mAh battery is absolutely excellent capacity for a mid-range smartphone. During our test, we were doing photography, video recording, playing games, Wi-Fi connecting and web surfing for 5 days, and it didn’t have to charge it during all this time.

While we were playing Asphalt 8 for 30 minutes, its charge dropped from 100% to 97%, one hour video recording reduced it from %83 to 60% and playing a Full HD video for one hour took only 5% of its charge and this means that X power battery life is really outstanding. Fast Charge is a feature which is available only on a small number of mid-range smartphones. Fortunately, LG X power is one of them and thanks to its Fast Charge feature it can charge the battery in 2 hours. Another special feature of X power is that it can be turned into a power bank and you can charge your other gadgets with it.

Mid-range smartphones market is a high competition market. There are at least 4 or 5 phones from each brand in this market, so it’s easy to choose one over another because of its better performance. However, if you’re looking for a mid-range smartphone with more than 4000mAh battery capacity, there`s little competition. Asus Zenfone Max ZC550KL may be considered as the closest competitor to LG X power in this field. However, LG X power is a powerful mid-range phone which battery capacity reaches the level of flagship smartphones; so it’s a suitable choice if you’re looking for a phone for everyday use as well as to enjoy long life battery.

Have you experience using LG phone before? What do you think about LG X Power? Feel free to share your opinion in comments below.