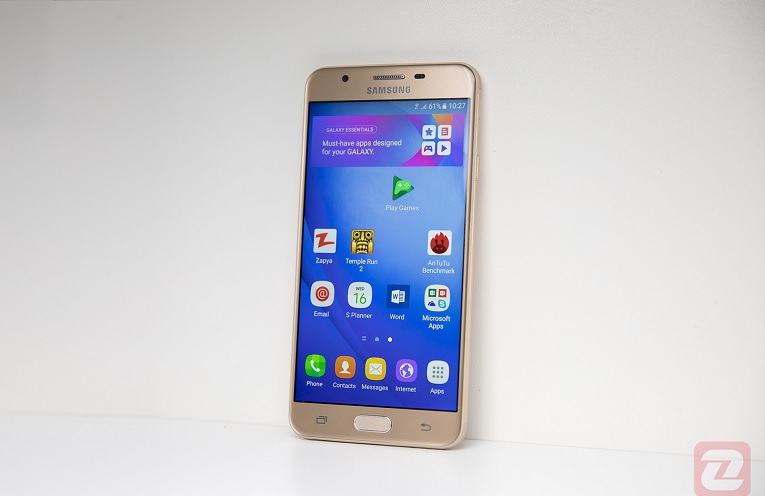 How is Samsung J7 Prime? Galaxy J7 Prime aims to stand out among mid-range smartphones with its metal body and full HD screen. But is it possible for it to reach this goal? If you want to know answer of this question read this review of Samsung J7 Prime.

J series of Samsung have always been one of the most popular series of this company because in addition to its affordable price, it gives nice experience to users too. But Prime version of this series wants to turn into a powerful and well-built phone providing better hardware while keeping its price low at the same time to get attention of Samsung’s fans. Galaxy J7 Prime is the newest model from Samsung J series which can be considered as a phablet with its 5.5 inches display. 7870 Processor and 3GB RAM are also there what lets us expect good performance of this smartphone. But is it really that good in the real world as it`s written on the paper? Take a closer look at Samsung Galaxy J7 Prime with me. Unlike J7 2016, there’s no any camera bump in J7 Prime and except of the top and bottom of the back panel, its body is completely made of metal and it feels good when you take it in your hand. Bezel-less and 2.5D glass screen protector lets its quality stand higher than its price. Power button as well as volume buttons is embedded on the right side on the phone’s frame. Their build quality is good and they’re easily accessible. The interesting thing about this phone is its speaker’s place. In J series we used to see the speaker on the back panel beside the camera, but it has moved to the frame above the power button. It’s an interesting decision Samsung has made, and it’s better than the back panel or bottom frame; although it’s placed on the frame, it isn`t easily to cover it by your hand and prevent playing the sound.

In total, according to its price, we can consider design and built quality of J7 Prime as one of its positive points. Metal body and 2.5D glass protectors are the factors which make it a well-built smartphone.

As I’ve mentioned before, the speaker of J7 Prime is embedded on the frame of the phone. Although it seems a bit strange at first glance, it’s a good place if we compare it with the back panel or bottom frame. Of course, performance of these fingerprint scanners hasn’t always been perfect; the same can be said about J7 Prime. The fingerprint sensor of J7 Prime does not act very well and you should put your finger with high accuracy and press it to help the scanner recognize your fingerprint. It takes time to get used to it and find the right method to use this scanner to get good performance out of it.

Of course, Samsung announced that it was the first time when you could use the fingerprint scanner without exiting standby mode. Actually, they are right and you can turn the display on by touching the fingerprint sensor even if the screen is off. However, the fact is that its performance isn’t very good and most of the times you need to press it hard to get your phone out of standby mode.

Although J7 Prime’s fingerprint scanner isn’t comparable with embedded fingerprint scanners on flagship smartphones, it’s definitely a benefit to have it on a smartphone at this price range; just keep in mind that you need time to get used to it and learn to use it properly.

Unlike other Samsung smartphones, in J7 Prime the company decided to use a 5.5-inch Full HD screen (TFT type what stands for Thin-Film Transistor). Colors look a bit unclear on this screen and black color does not have appropriate depth. Also, viewing angle is average and colors change at high angles. On the other hand, 1920 x 1080 resolution is a perfect choice for this phone, the display`s quality is appropriate taking into account its price. Maximum brightness is also satisfactory and although there’re some difficulties, it can be used under direct sunlight; so generally, we can consider quality of J7 Prime’s display very good according to its price range.

Galaxy J7 Prime is equipped to Android 6.0.1 Marshmallow and it’s also personalized with TouchWiz user interface by Samsung. Samsung has tried to make this user interface simple, although that’s not as simple as Galaxy S’ TouchWiz and we still can see several apps doing the same thing. So by default you’ll have access to two Internet browsers, two email apps and two apps for photo gallery. Just like before, there’re many features in Samsung’s user interface. For example, you can completely change graphics theme of your phone and make it very similar to pure Android, give attractive and cheerful colors to user interface, change font or even adjust keyboard size as you prefer. Samsung has also added its famous S Health app to this smartphone. Though, since there’s no heart rate sensor on this phone, this app does not have this feature.

According to many changes that have been made by Samsung as well as new features like ability to change phone’s theme, new user interface of Samsung has improved, become more attractive and doesn’t look cartoon-like anymore. We can even say that Samsung managed to turn it from a drawback to an advantage.

J7 Prime has 13MP camera, but taking into account its low price, we can’t expect much from it. Pictures quality is average, but can decrease in difficult lighting situations. Of course, it’s not bad at all for a smartphone at this price range; colors look natural and dynamic range is appropriate. Picture details are also good for a low-cost smartphone.

In J7 Prime Samsung has used 7870 Exynos which is a low-end processor which has Cortex A53 with 1.6 GHz and 3GB RAM, so we can expect good performance on a low-cost smartphone. As it’s shown in benchmark result, J7 Prime’s performance is at the same level as low-cost smartphones, and high performance can’t be expected from it. Of course, it’s suitable for daily use and it won`t freeze or hang on general tasks, but it can’t be a good choice for gamers. Generally, users who are looking for a smartphone at this price range, don’t want to run heavy tasks or play high-end games; completing general daily tasks will be enough for them and J7 Prime can handle them quite well. You can also read review of Samsung Galaxy Note 7 here.

Samsung has equipped J7 Prime with a large 3300mAh battery. According to the phone`s Full-HD display and low-power processor, we can expect good battery life. As usual, we set brightness of the display on 50%, wireless network was turned off and we played an HD video until the battery got from 100 to zero. J7 Prime battery remained for 14 hours and 10 minutes which is considered as a very good time. Another factor that determines battery lifetime is SOT (Screen On Time) of the device. In our test SOT was about 6 hours and during this time 2 hours was spent for watching videos, 2.30 hours for web surfing, instant messaging and social networks and the last hour and a half was spent on photography and playing games. This is considered as heavy use which J7 Prime battery handled very well for a full day. Most users don’t use the phone that much during the day, so you can expect at least one full day (or even more) of charge.

Comparison of Galaxy J7 Prime’s Battery with Other Competitors As the result shows, battery life of Galaxy J7 Prime is definitely an advantage of this smartphone compared to other competitors. The sales of Samsung J series has been higher than any other series of Samsung during the past years what turned it into the most successful family of this Korean company and its new version with many positive changes can follow this successful path. Well-built body, camera with good quality for daily uses and excellent battery life as well as an appropriate display – all of them let it stand out among other low-cost smartphones.

Of course, we shouldn’t forget about low performance of its fingerprint scanner which is one of the main drawbacks of J7 Prime; anyway, you might get used to it after using it for a while. Finally, it must be said that Galaxy J7 Prime is a very good phone compared to other low-cost smartphones and it can exceed all expectations of users who are looking for a budget and affordable smartphone.

What do you think about this Samsung J7 Prime? Have you used any of Samsung’s phones before? Feel free to share your experience in comments below.