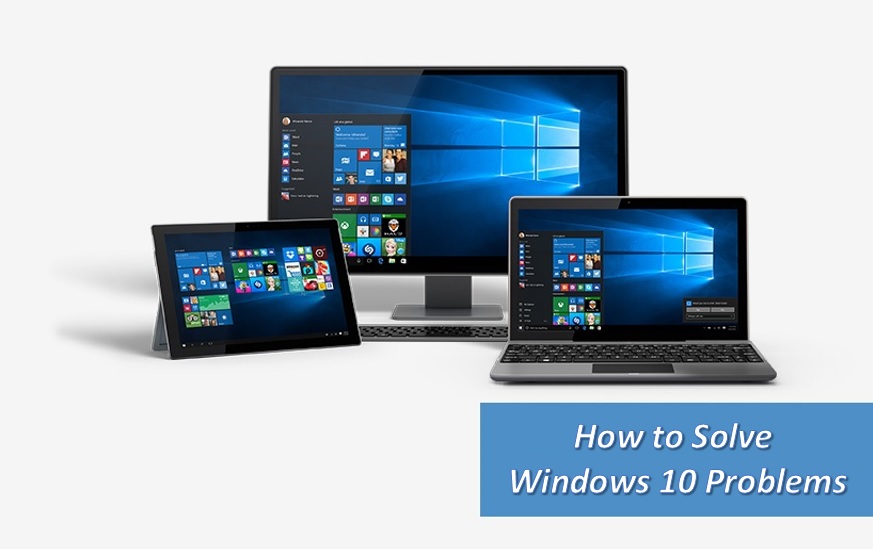 Many problems, bugs and security vulnerabilities were solved during the last year, but many others are still there. For example, many users face the problem in connecting to the printer. Although anniversary update solved some issues, but it added some new ones too! And as you probably know, Microsoft is going to run a new update called Creators Update in the future. Ok, let’s start with top 20 Windows 10 problems.

How to Solve Windows 10 Problems in 3 Steps If you’re planning to change your OS and move to Windows 10, the operating system installation is the first thing you may get problem with. Any new OS needs specific amount of disk space which lets it to be downloaded, installed and run properly. 16GB of storage space is required for Windows 10, so you need 16GB of free space on the disk drive where you want to install Windows 10. The installation process is the same as for previous versions of Windows, so if you upgraded your OS before, you won’t have any problem.

To see how much free space you have on your computer, go to My Computer (or This PC) which displays all your disk drives, free space will be shown under each disk drive. You can also check your free space by right-clicking on each of the disk drives (C drive, for example) and choose Properties. So before installing Windows 10, make sure that you have enough free space on your system. It is exactly the same as free space issue. Your computer should have appropriate hardware to be able to run Windows 10. Of course, Windows 10 hardware requirements aren’t too high compared to current available hardware in the market. Some users got problems with Windows 10 activation process which can have several different reasons. In some cases the easiest way is getting another Windows 10.

Even having Windows 7 activation code, you were able to format your system and then install Windows 10 and use your activation code of Windows 7 to activate your new Windows 10. But all this was possible until July 2016 and now you need to get a device with installed Windows 10 or you should buy its license.

Also, keep in mind that sometimes your Windows activation issue can be solved by connecting to the Internet and signing in into your Microsoft account.

4.Prevent restarting because of software updates Windows 10 is a cloud (Internet) operating system in many aspects. It has many benefits, but troubles come when Microsoft insists to update Windows as soon as possible.

The most challenging part of automatic update is its restarting which will be done when you are least prepared to it. To prevent this issue, go to Settings, click on Update & Security. Now go to Advanced Options and choose Notify to Schedule Restart. Now Windows will ask your permission every time it wants to restart the system.

Of course, it’s been solved in Anniversary Update and if you’ve done it, you won’t face this issue anymore. So to prevent this issue, it’s better to update all your apps and software. If you have default Windows apps on your system, you can update them through Microsoft Store (click on Windows button and type Store). Your desktop software can be updated manually. Due to increasing number of hacking and cyber-attacks, it’s important to keep your information safe. Windows 10 has done many security preparations, but it’s also good to make it safer with some manual changes. One of the issues that is important for people who care for their privacy is de-activating Wi-Fi Sense. This option saves your Wi-Fi password in your account and if you sign in into your account from another system, your Wi-Fi password will be transferred too.

Microsoft has released an update for Wi-Fi Sense recently which shares less information, but the best way to prevent unwanted issues is completely de-activating this option.

To turn-off Wi-Fi Sense, go to Settings and click on Network & Internet section. Now go to Wi-Fi and choose Manage Wi-Fi Settings. Now you’re able to turn on/off any of the displayed sections. If you’ve done anniversary Windows update, you just need to go to Wi-Fi to access Wi-Fi Sense. In addition, there are more different security options in Privacy which you can activate or de-activate according to your needs. It’s easy to find the latest version of your printer driver. To do this, just search your printer model in Google or Bing and download its Windows 10 version. You’ll probably find it in your printer manufacturer`s website too. Then install your printer according to the manufacturer instruction by connecting the printer to your system and running the installation file. After Microsoft lost its hope in Internet Explorer, it introduced Edge browser in Windows 10. Of course, you still can find Internet Explorer among default Windows programs. But the fact is that Internet Explorer has been inefficient for several years what convinced users to switch to secondary browsers such as Chrome, Firefox, Opera, etc. That’s not easy to change users` habit that has been formed during all these years. Open Edge browser and enter the name of your favorite browser in Bing search engine, then download and install it.

To set it as your default browser, follow this path: But if you’ve decided to give Microsoft a chance and try its new browser, I ensure that you won’t regret it. Keep in mind that the real power of Edge will be noticeable only if you have a tablet or a touchscreen laptop because Microsoft optimized Edge for the touch screen and stylus.

Surfing the web with Edge is enjoyable. And except for the problem with visiting old websites (which isn’t actually Microsoft`s problem), you won’t face any problem. In addition, Microsoft tried to make its new browser faster, and it uses system resources such as memory, CPU and battery much less than other browsers.

If you’ve used Chrome before, you probably know that it takes up system resources a lot; especially your battery charge. I’ve tested Edge and compared it with Chrome in three different categories: RAM, CPU and Battery and Edge was the best in all categories.  Make a Note feature is another advantage of Edge browser which lets write notes on web pages. It’s very useful, especially when you use a touchscreen device. There’re several other new features – from sharing to merging – that will be very helpful once you get familiar with them.

One of the disadvantages of Edge is its incompatibility with other operating systems. Most users have devices based on different OS like Windows laptop, Android phone and iPad, for example. One of the most important issues is having all our search results, bookmarks, etc. in one place regardless of OS and device. This is something that Google Chrome paid more attention to compared to Edge.

10.Edge does not play music and sounds when it’s minimized That`s what happened in the first version of Windows 10, but the solution cam with Anniversary Update. To block pop-ups in Edge, click on Settings (… sign) in the top right corner, then choose View Advanced Settings. Now, as shown in the image, you can block pop-ups. If you bought a Windows 10 touchscreen device, you probably want to get the most out of its touchscreen mode. It’s easy for convertible devices because when you change its physical mode into touchscreen mode, Continuum feature of Windows 10 will be instantly activated. But if you want to use tablet mode even in laptop mode, you can do it easily through Action Center (right corner of the Taskbar) as well as by following this path: Many people have reported that their touchpad didn’t work after upgrading to Windows 10 from Windows 7 or 8. This issue can be easily solved by updating touchpad driver. However, if you faced the same problem, use these tips. Before doing anything, make sure that physical Wi-Fi button isn’t off on your laptop. If it’s on and your touchpad still does not work, follow the path below:

A new window will open. Go to Device Settings and make sure touchpad is activated.

If it doesn’t help; press key combination Windows+ X  to open Device Manager. Now click on Mice and other pointing devices and update its driver.

If you still the problem is not gone, find your laptop model and download the latest driver of your touchpad from your laptop manufacturer`s website. They probably have Windows 10 version of all hardware drivers. As it`s obvious from its name, this is the mode which runs the operating system without startup apps and unnecessary drivers. To access Safe Mode in Windows 10, press Shift while turning on your computer or click Restart while pressing and holding Shift button at the same time. 17.Speed up your computer There’re several ways to increase the speed of your computer, and Windows 10 provides some options in this field too. For example, turning off the apps which run when your system boots up, can positively affect your system’s performance. To access startup apps, press key combination Ctrl + Alt + Delete and choose Startup. Now all apps that run at system startup are displayed and you can de-activate those apps which aren’t necessary to be run at startup.

Using Disk Clean Up option which is available by right-clicking on the disk drive and choosing Properties is another way to make your system speed up a bit. Windows 10 Lock Screen can be annoying sometimes, especially for non-touchscreen devices. Windows Hello is a nice feature IF your device supports it. Luckily, Microsoft provided a solution to this issue. Since you should access Windows registry to solve it, I recommend getting a backup from your Windows registry before going to the next steps.

Click on Start button and type regedit. Choose regedit, then go to the path below:

Choose Personalization Key, then click on New. Now choose New Value #1 from the right panel and change its name to NoLockScreen by pressing F2 button. Finally, double-click on it and change Value Data to 1 and click OK. After restarting Windows, you won’t see Lock Screen page anymore.

Note: It’s not recommended at all if you haven’t made changes on Windows registry before. Microsoft decided to not support DVDs by default in Windows 10. The reason for it may be the fact that the world is going to use the Internet more in future and most current computers don’t even have a DVD player.

However, Microsoft suggested Windows DVD Player which you can get from here. Anyway, if you’re not willing to pay money for that, I would recommend you using free apps such as VLC Media Player. Also click here to see some other free options which can meet your needs.

20.Preventing displaying too many notifications Now you can set which apps you want to receive notifications from, by choosing On/Off in front of each one.

Finally if you want to know what lets Windows 10 stands out among all other operating systems, I invite you to take a look at new features of Windows 10.

That’s it! Now you know about most commong Microsoft windows 10 problems; If you’re using Windows 10, I would like to know how satisfied you are and what other problems you have faced using it. If there is anything else that isn’t listed here, feel free to share it with me in comments below. I`ll try to come up with a solution for you as soon as possible!