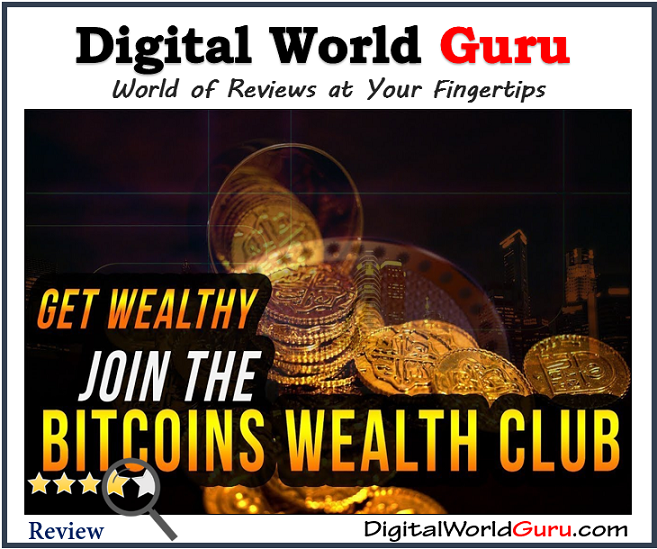 After an invitation from a renowned marketer, I have decided to research on Bitcoins Wealth Club and wrote a detailed review of this new making money opportunity. You’ll find answer of all your questions about this program and more importantly will know if you should give it a try or not. As mentioned, I got an invitation from a respectable online marketer to join Bitcoins Wealth Club. I have had my reservations on this money making scheme because it did not make sense to me, and it still doesn’t. I have never given it much thought until I received several emails from this reputable marketer; this is when I decided to take a closer look at Bitcoins. My focus was to establish whether it is a scam or legit business and here is what I found out about Bitcoins Wealth Club.

The website resembles most moneymaking schemes I have reviewed recently. Just like bitconnect and power mining pool among other earning opportunities online, Bitcoins Wealth Club claims you can make significant amount of money by simply signing up and buying bitcoins. There is no more explanation on what you are supposed to do to earn; the belief is bitcoins are automatically mined thus earning you money.

Honestly, I have my reservations for such earning techniques because there is no clear explanation of how you work to earn. In fact, there is zero effort. All they say is invest in bitcoins to earn extra income. Lately, such earning opportunities have significantly increased with millions of people across the world joining and losing money. In my experience, you have to work to earn money; the easy techniques of making money are all false. The guarantee on earning a standard amount of money is not practical to me because automatic trading and mining does not make economic sense.

However, am confused about this whole thing because I don’t believe in any of the techniques yet here is a recommendation from a reputable online marketer. I have no facts to dismiss Bitcoins Wealth Club as a scam but it does look like it. People have lost money with earning opportunities using this same technique. The earning claims are huge and unrealistic but it is difficult to ignore Bitcoins Wealth Club considering the recommendation comes from a marketer I respect. How To Earn with Bitcoins Wealth Club

You are probably familiar with this technique, it is simple but challenging. To earn with Bitcoins Wealth Club, you have to join USI Tech and focus on recruiting as many people to form a network. It is the same with multi-level marketing; there are several levels structured for you to recruit and make money in form of bitcoins. The more people you recruit, the more you earn. However, recruitment is the most challenging part where people fail and quit. Experts in the schemes say it is the defining stage for success or failure in making money. Honestly, it is not easy to convince people to join your team for you to earn residual income.

Of course, this targets people who are triggered with quick and easy money. Also, people involved with multi-level marketing, money matrix, and revenue sharing platforms are easily lured by such Ponzi schemes. The primary target is people involved in Bitcoins; whether you are at consideration stage or already investing, you are likely to be carried away by Bitcoins Wealth Club. Unlike what is promised, the earning process is super slow, if there is any earning at all. Nothing interesting with the scheme

How Much Does Bitcoins Wealth Club Cost?

You have to part with significant amount of money when joining Bitcoins Wealth Club. First, you pay an annual fee of €600 for Agency license and an additional €600 to buy a lifetime Forex license. Is Bitcoins Wealth Club a Scam?

Of course, it is a scam. Bitcoins Wealth Club is not a real website and definitely not an earning opportunity as most people think. The primary goal of the platform is to funnel registered members to other Ponzi schemes including USI Tech. Besides, the website infects your computer with viruses.

The owner’s trick is simple, collecting money from registered members and stuff it in a Swiss bank account and wait until it accumulates to a set goal or until the recruitment strategy fails. The scheme always collapses after few months, no doubt about this. The owner will then disappear to a life of luxury and return with a similar scheme when the pockets dry. Sadly, we never learn.

You have a better chance of making money in gambling than in schemes.