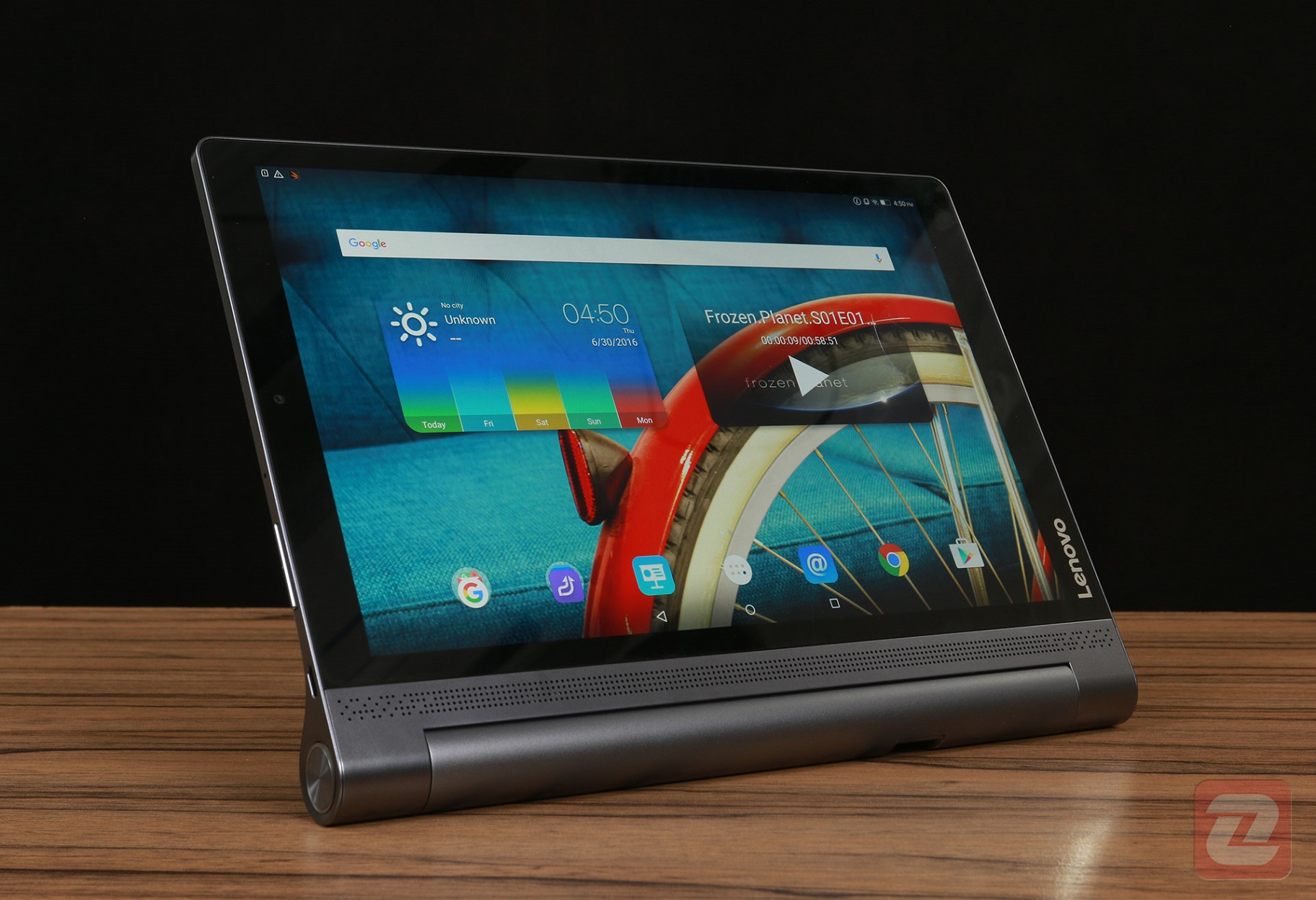 See the Lowest Price at Amazon

Lenovo Yoga Tab Series always has tried to be different from other tablets on the market. Yoga Tab 3 Pro is different, just like its previous generations. In addition to a unique small stand, it has a built-in video projector, so the difference is felt more than ever. Stay with us to read lenovo yoga tablet 3 review with all its features as a new flagship tablet.

Lenovo Yoga Tab 3 Pro is the newest tablet from Lenovo’s Yoga series, and this time you`ll see a different design as well. A 10.1-inch display with QHD resolution, 4 Dolby speakers and, of course, a unique stand and a 70-inch projector have made Yoga Tab 3 Pro seem to be more different than ever.

Lenovo tablets are in a variety of different price ranges, but Yoga Tab 3 Pro is a flagship tablet which has a wider range of features than a simple tablet.

If you have used the previous generation of this tablet, the design of Yoga Tab 3 will not be new to you, however, this design is certainly special and different. The first thing that will catch your attention is the stand of Yoga Tab 3 Pro. This part of the tablet has a cylindrical form and it alone makes the ergonomics inappropriate, but if you open it, you will notice a special stand. You can put the tablet in an upright position on the stand and use it easily without the need to hand-hold the tablet.

Embedded stand is high quality and can be set to your desired angle. The stand is strong enough not to let the tablet fall, when you hang it up. Unlike the rest of the frame, the stand is made of metal to be strong enough. Of course, the use of a plastic frame in the body of the tablet had its own reasons – the weight of the tablet is 667g and metal frame could make it heavier.

Yoga Tab 3 Pro is much heavier compared to its competitors, but this weight has a serious reason. Lenovo has benefited from a 10,200 mAh battery in this tablet which is a reasonable reason to raise the weight of the electrical device. Definitely, most users will prefer the device to be heavier rather than to have a larger battery. But the interesting thing in the new generation of Yoga tablets is the use of leather on the back of the device which resulted nor only in attractive appearance, but non-slip ability as well. In addition, the leather part of the tablet feels much better when you take it in your hand.

Yoga Tab 3 Pro has also splashproof IP21 certification which has made it resistant against splashes of water drops. But another big change in Yoga Tab 3 Pro is an embedded projector able to play videos in sizes up to 70 inches. This is a 70-inch projector which plays videos with 480P quality. Of course, the embedded projector is not strong enough and to show images with enough resolution, the desired environment should be quite dark. It works better with dimensions of less than 50 inches, because in a larger size the image quality drops and loses its charm. The built-in storage of Yoga Tab 3 Pro is 32GB, but Lenovo also provides the option to increase the memory by using micro SD. In addition, SIM card slot is located beside memory expansion slot which lets you take advantage of mobile Internet. Except of 3.5 mm audio jack and a micro USB port, there are no other ports on Yoga Tab 3 Pro which makes its frame look simple and more attractive.

One of the most attractive parts of the new Lenovo tablet is its display. This 10.1-inch display has a QHD resolution and 299ppi pixel density. The type of the display is IPS LCD and it shows colors very naturally and accurately. The display brightness is also quite high, so you won`t have any problem while using it in direct sunlight. The minimum brightness of this tablet is excellent, too, and when you work with it for a long-time, your eyes won`t hurt. The problem you might have while using this tablet is high sensitivity of the touch screen. Lenovo has adjusted it in a way so that you can use your tablet even if you wear gloves. The high sensitivity has led to more unintended touches made by a headphone wire or even parts of your clothes. If Lenovo could let users adjust this feature manually in the settings, it would have been much better, and we hope this option will be available in next software updates provided for Yoga Tab 3 Pro.

Lenovo embedded four speakers in the front of Yoga Tab 3 Pro to provide Dolby Atmos surrounding sound. These speakers are just great and have very high volume. The sound clarity is also excellent and makes it an ideal device for those interested in gaming or watching video. In addition, the projector placed on the tablet helps to feel the powerful speakers better than ever. Without a doubt, powerful speakers are one of the things that you will enjoy while using Yoga Tab 3 Pro.

Lenovo Yoga Tab 2 Pro has 2 cameras. The main camera is 13 MP, while the other one is 5 MP. Certainly, very few people use the tablet as a device for photography, that`s why the camera is not an important factor a tablet choice.

The camera’s performance of Yoga Tab 3 Pro is not so good. Images taken in little light are not very detailed and colors look dead. The less is the light the camera gets, the worse is the performance of the camera. In most cases, if the ambient light is very low, taken images will be unusable. All issues mentioned for the main camera are the same for second camera. Images do not have good quality even with enough light, and often images taken with today’s mid-range smartphones will have better quality.

As noted above, the camera does not play a major role in choosing a tablet. Yoga Tab 3 Pro also does not have a good camera and certainly it’s better not to use this tablet for photography.

Lenovo’s user interface was not the best in the past. Same apps, lack of app drawer (a collection of all the apps and widgets installed on your device) and unattractive appearance resulted in little attention for this UI. But in Tab 3 Pro, Lenovo did not repeat its mistake and decided to make a simple design and reduce the number of unnecessary applications which caused this tablet’s UI look better than before. Some features such as running two apps side by side or an app for writing with a stylus are things with the help of which Lenovo has tried to turn its tablet into a professional device. But the unusual thing about the software is its OS Android 5.1. While the preview version of Android 7 is now available, this version of Google OS is not acceptable for a flagship tablet.

However, in terms of OS, Yoga Tab 3 Pro is a good tablet, because of simple user interface and little number of unnecessary applications. Also, you can apply your desired changes to this tablet by using the flexibility of Android.

Yoga Tab 3 Pro is equipped with Intel Atom 2.24GHz Quad-Core. Lenovo has provided only 2GB of RAM with this CPU which seems low according to today standards. As usual we performed benchmark tests on the tablet to get a better sense of its performance. Below you can see the result of these benchmarks: As the benchmark result shows, we deal with a powerful tablet which will run your daily tasks perfectly. Switching between different things such as UI, apps and even playing games didn`t cause any problem on this tablet. Of course, due to the low amount of RAM some applications will have to reload which slows down the user experience.

In addition to powerful hardware we expected to see bigger amount of RAM for this tablet from Lenovo, so that users have a better multitasking experience. Nevertheless, this powerful hardware can easily meet the needs of most users.

The weight of Yoga Tab 3 Pro is around 700 g that is more than usual, even for a 10.1-inch tablet. However, this weight gain has a logical reason – Lenovo has installed a large 10000 mAh battery in this tablet. Thanks to the cylindrical design of the stand, this large battery fit into the tablet pretty well.

As always, we’ve set the display brightness of this tablet to 50%, disabled wireless connection and played a video with HD resolution until the battery ran from 100% to zero. Before finishing the charge completely, Yoga Tab 3 Pro battery lasted for 18 hours and 10 minutes with a single charge which is absolutely extraordinary. In addition, Yoga Tab 3 Pro can guarantee up to 15 hours and 30 minutes web surfing for users. We will show you “Screen On Time”. Of course, this amount of time very much depends on how the tablet was used, but with a description of our uses, we’ll try to make a standard for comparing devices in real experience, give you a better understanding of reviewed battery. In our experience with this tablet, the SOT time in Yoga Tab 3 Pro was about 8 hours on a regular basis. During these 8 hours, we’ve spent about 3.5 hours to watch videos through projector, 3.5 hours for social networks and surfing the web and the remaining hour for playing games and photography. We`ve used it a lot, and maybe it’s the time that a normal user spends for working with a tablet in 3 or 4 days.

As results show, the battery charge of Yoga Tab 3 Pro is impressive, and it’s one of the best in this field and certainly can meet the expectations of most users.

Lenovo Yoga Tab 3 Pro is a different tablet and definitely the difference is not only in appearance. It includes features like a 70-inch projector which makes it a unique tablet. In addition to being unique, battery charge of Yoga Tab 3 Pro is excellent, and the display provides very good quality to the user. High quality speakers make multimedia experience of Yoga Tab 3 Pro extraordinary. However, the relatively high weight and unusual ergonomics turned Yoga Tab 3 Pro tablet to a device for specific kind of people. Nevertheless, this tablet won`t suit everyone. But if you want to have a tablet with special features, a high-capacity battery and a great display, without a doubt, Yoga Tab 3 Pro is one of the best options in the market.