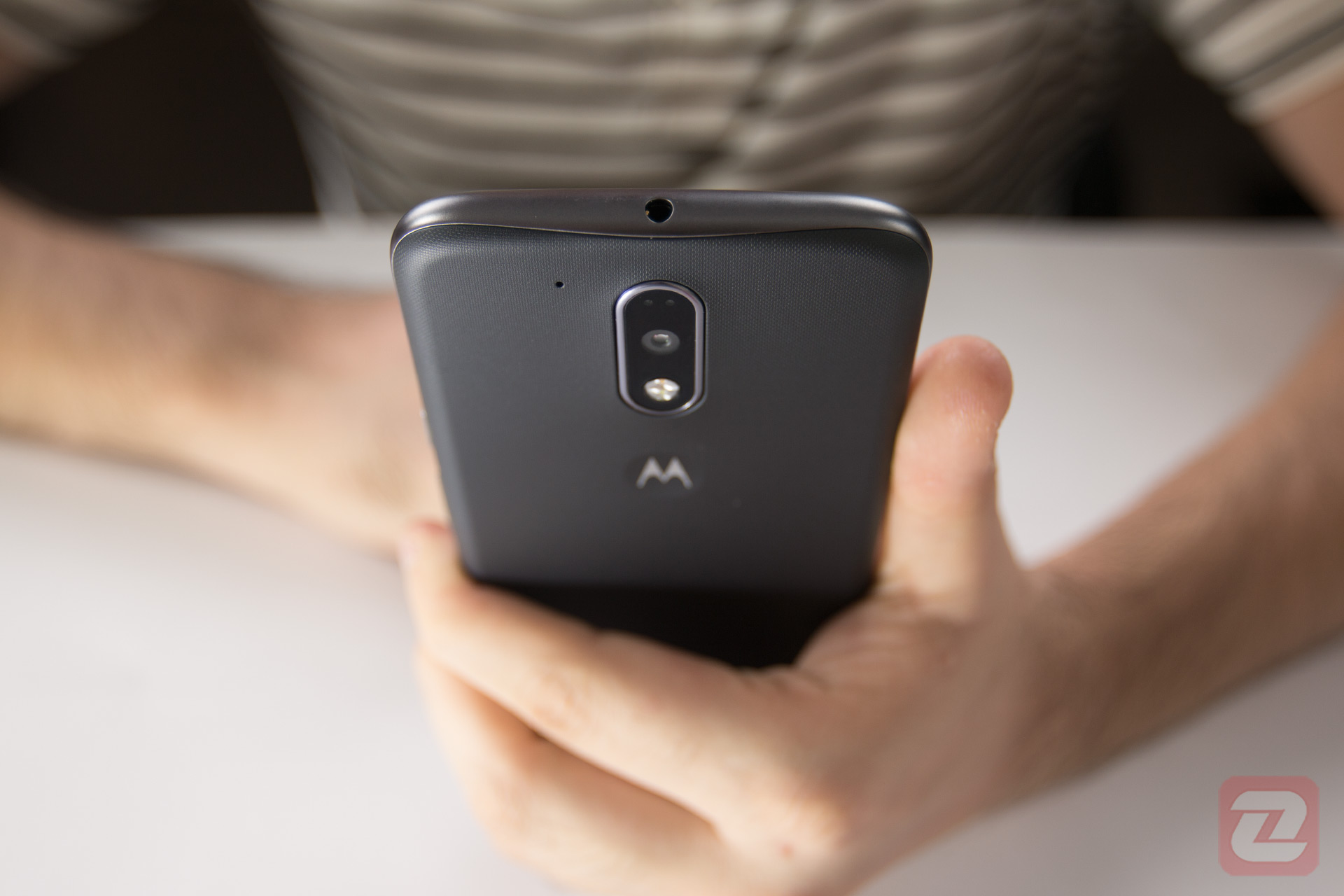 Moto G4 and Moto G4 Plus are two mid-range Motorola smartphones that were released this year. Continue reading motorola moto G4 Plus review which has a beautiful design and appropriate hardware.

Motorola (which now operates under Lenovo brand) gained a large share of the market of cheap smartphones with appropriate hardware after releasing the first series of Moto G and was on the top of the list for a few years until other companies entered this market and Motorola felt competition more than before. The company’s newest smartphones from Moto G series are Moto G4 and Moto G4 Plus which intend to gain a large share of the market by providing good hardware as well as a good price.

After acquisition of Motorola by Lenovo, many were worried that Motorola could be influenced by Lenovo and stop producing some of its popular series such as G series, but it never happened and Motorola has introduced a new generation of its popular G series in Moto G4 and Moto G4 Plus models. The starting price of $200 and $250 for these two models shows that Motorola is completely ready to compete with Xiaomi and Huawei at any level.

This time Motorola has made display larger with resolution up to 1920 x 1080 pixels. Also, paying a higher price you can benefit from 4GB of RAM. In addition, Moto G4 is released in a simple and Plus versions while the only difference between them is the camera and the fingerprint sensor.

Motorola has retained its original design in Moto G4 Plus. Moto logo on the back, curved back panel and curved frame of the phone – all these items indicate that we are dealing with a Motorola smartphone. The design of the front of the phone is also the same as before with just one exception – Motorola has added a fingerprint scanner in Plus version. Like before, the back panel of the phone is made of plastic with a special design which is a little rough to prevent the phone from slipping out of the hand. Moto logo is also placed on the back with a very small curve and somehow it is Motorola signature. There is a 16-megapixel camera as well as dual flash and a sensor for laser focus which complete overall design of the back panel and, as always, combines beautiful design with reasonable price. The frame of the phone repeats simplicity of the whole design of the smartphone. The power button is on the right side of the frame, right on the top of the volume adjustment buttons which have acceptable quality. The textured power button makes it so easy to tell it from other buttons just by touching it. There is no buttons or ports on the left side of frame, and the simplicity of the design here catches the eye. A 3.5 mm sound jack is on the top of phone frame and a micro USB port is on the bottom which keeps the design of the device simple.

Although Moto G4 Plus doesn’t give a feeling of a flagship phone when you take it in your hand, however, according to its price, the design is beautiful enough. The only flaw is the phone`s thickness which affected the device ergonomics negatively. However, it’s a light-weight phone; its weight is about 150 g which makes the low price of the smartphone more obvious.

Lenovo and Motorola have used a fingerprint sensor on the front panel in Plus version of Moto G4. This sensor is bumped and has a frame; however, it does not function as a button and is there only to accommodate the sensor that is embedded in this part. Adjusting the sensor is very quick – after putting your finger there a few times it’s ready to work. Also, this sensor reacts very quickly and recognizes your fingerprint fast. The positive side of the sensor is that, to activate it, the display does not need to be turned on. Unfortunately, the sensor does not act like a button and on the first couple of days you will press it mistakenly to access Home screen. The new generation of Moto G Plus is equipped with a 5.5-inch display which has improved compared to the previous generation and has Full HD resolution. The panel on this display is IPS LCD and, of course, as expected, it has very good viewing angles.

Unlike AMOLED panels, colors do not seem to be saturated and they’re closer to reality. Also white color does not have yellow or blue halo and it’s very close to pure white. Although, black color depth isn’t as good as on AMOLED panels, it’s satisfactory and very convenient. Density of this Full HD display is enough what makes texts readable and images clear on this smartphone. Such display gives acceptable image quality and requires less power consumption. Maximum brightness of the panel is very good in Moto G4 Plus. Working with this device under direct sunlight won`t be a problem. The minimum brightness is also excellent and user eyes will not hurt while using the phone in dark environment for a long time.

Just like before, Lenovo and Motorola have decided not to make drastic changes in user interface and made it similar to pure Android. This is a positive point because pure Android has reached relative maturity in terms of appearance as well as features, and it also guarantees faster software updates when UI is close to pure Android.

Notification bar, different sections of settings and most of default apps are the same as in pure Android. Maybe the main difference from pure Android is its Moto app which has added some user features to the smartphone. After a short period of time you`ll become addicted to such user features as twice shaking the phone to turn on the flash as a flashlight or a display feature that turns the display on when you pick it up.

Of course, remember that the display feature does not turn on the entire display and it acts like Ambient Display in pure Android. It shows time and your notifications in the form of icons and by touching them, full text of these notifications will be shown. Of course, it`s not the whole list of Moto app features. The camera app will run automatically if you twist your hand with the phone twice. If you pick up the phone from the desk while it`s ringing, it will switch to the silent mode.

As we`ve mentioned before, pure Android combined with useful features installed in Moto G4 Plus by Motorola, turns this phone into a lovely smartphone with excellent software.

One of the differences between Moto G4 Plus and its normal version (G4) is a sensor in the camera. Unlike Moto G4 which has a 13-megapixel camera, Moto G4 Plus is equipped with a 16-megapixel sensor.  The cameras never were strong points in Motorola phones in the past, but this time, Sony sensors promise a different experience. Images captured by this camera in enough light are very high quality, colors seem natural. Of course, the image contrast is somewhat less than desirable and you may lose details in dark environment, for example, in shadows. Although HDR feature helps a lot to fix this problem, it can`t be used in all situations because it results in overexposed images (when there is too much light in some parts of the photo).

Unfortunately, the situation is quite different in the dark environments. The colors are dead and the noise is very high in the pictures. Videos recorded by Moto G4 Plus have good quality according to its price. Although there is no Optical Image Stabilization (OIS) in this sensor, but its Digital Stabilizer works very well and 1080p videos are almost not shaky. Of course, as expected, recorded videos are not that detailed, and you shouldn’t expect to record videos of the same quality as flagships.

Sample of images that have been taken by Moto G4 Plus:

There is intense competition between mid-range 5.5-inch Full HD display smartphones with a price range of about $300 which results in developing powerful hardware for these phones. However, Motorola has used relatively weak processor compared to other competitors and equipped Moto G4 Plus with only Snapdragon 617 and 3GB of RAM. Of course, now there is another available model for this phone with 4GB of RAM. As before, the phone has been tested by different benchmarks and here is the result:

As you can see, Moto G4 Plus isn’t a powerful phone and has strong competitors in its price range. You won`t feel the difference in everyday use or while switching between different sections in UI, but it would be challenging for the processor if it’s used for playing complicated games or recording videos for a long time.

The phone gets hot when you use it for photography for a long time during the day. It’s actually impossible to use the phone camera in these situations and it takes a long time to run the camera app and take photos.

In general, we expected to see more powerful hardware in Moto G4 Plus according to intense pressure from other competitors, but it did not happen and Motorola thinks that Snapdragon 617 is enough for its mid-range phone.

Moto G4 Plus is equipped with 3000mAh battery which is less than expected taking into account its 5.5-inch Full HD display and 9.8 millimeters thickness.

As usual, we set brightness of the display on 50%, turned off wireless network and played an HD video until the battery gets from 100 to zero. Moto G4 Plus battery worked for 9 hours and 25 minutes before it died which is a good time. In addition, Moto G4 Plus can guarantee 11 hours of web surfing. We will share Screen On Time with you. However, this amount of time very much depends on how the smartphone was used, but we will describe how we’ve used it, come up with a standard for comparing devices in real experience and give you a better understanding of reviewed battery.

According to our experience, SOT for Moto G4 Plus was about 4 hours and 30 minutes on a regular basis. About an hour was spent for watching video, 2 hours for web surfing, social networks and instant messaging applications and the last hour for playing game and photography. It was our total use in a working day and it shows that single charge of Moto G4 Plus is enough for semi-heavy use during the day. Of course, note that the phone has been connected to mobile Internet half of this time and the other half it was connected to Wi-Fi network. And if you use mobile Internet regularly, this period of time may be shorter.

The recharge time is also appropriate, and with the help of Turbocharger embedded in the phone, the battery will be fully charged in about 2 hours.

Actually, Moto G4 Plus is the fourth generation of popular Moto G series which helped Motorola to become popular among users again. Very good build quality, appropriate battery charge and of course, high-quality display – all of it turns Moto G4 Plus into a very good phone in its price range. Of course, such things as a weaker processor compared to its competitors, can be considered drawbacks for Moto G4 Plus. Although Snapdragon 617 is enough for everyday usage, you should not expect it to run complicated games well. However, Moto G4 Plus is a great smartphone in its price range which is supported by the name of a respected company like Motorola and can attract a lot of attention.