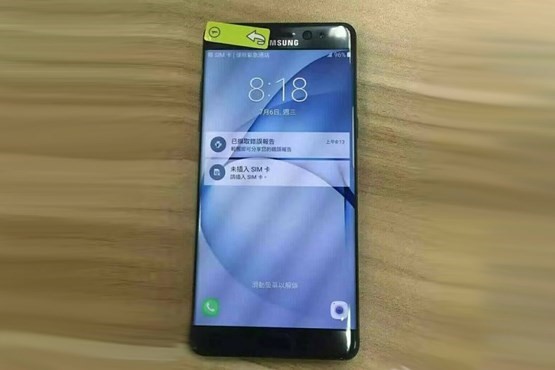 As we come closer to releasing date of Galaxy Note 7, talks about it become hotter these days, and rumors about this new smart phone are spreading hour by hour. Just several hours after publishing photos of prototype of Galaxy Note 7, a full front picture of the product has been published.

Except of rendering images, this is the most perfect and clear image that we have received for this smartphone. It shows that this product is ready for release and also it’s a new version of Note UX of Samsung TouchWiz interface.

As it’s shown on the picture, there are a sensor and a camera on the top left side of Note 7. It seems that one of them is Iris Scanner responsible for bio-metric identification which enables users to unlock the smartphone with scanning their iris. In addition, the device on this picture is sleeker than prototype’s picture and also Samsung logo is still on the top of the device. So, probably, this picture is the likeliest picture of Note 7.

In addition, according to Zauba database, Note 7 has a waterproof glass back panel that is probably rated IP68 like Galaxy S7/S7 Edge. Although we are not surprised by this ability, but we are glad to hear that it’s included in Note As for the screen, this smartphone has a curved display, and it seems that there was no any model with normal display. Of course, flat-display lovers shouldn’t be sad, because its narrower body is more comfortable to use.