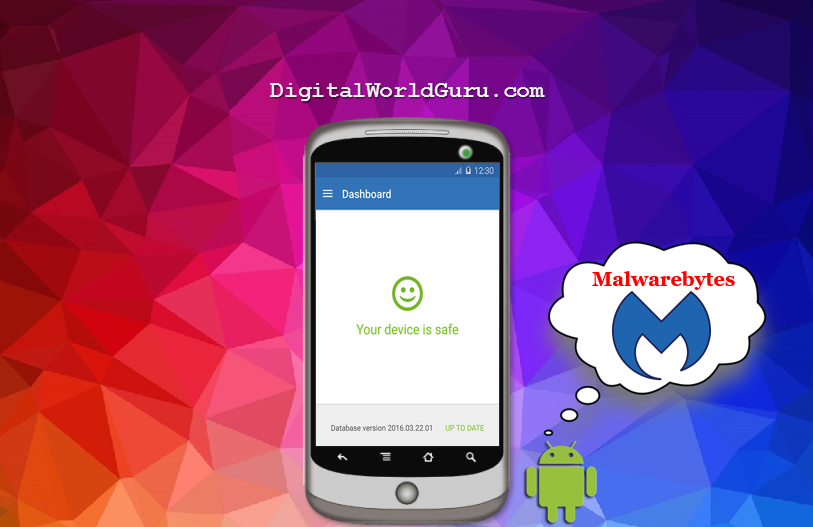 What is Malwarebytes app? It’s simply an app which helps you find and clear malware from your smartphone.

Although mobile platforms aren’t as vulnerable to viruses as computer operating systems, there’re many kinds of malware that can make your device slow or cause other problems. For example, some protection apps that are automatically installed on your device or web pages that redirect you to ads or other unrelated websites are the most common type of malware which you’ve probably experienced too. Of course, malware isn’t limited to these cases and there’re tens of other types of malware that negatively affect your device’s performance.

Play Store also tries to find and remove this malware on a regular basis, although the number of mobile malware is increasing. Detection and removing malware on mobile devices isn’t as accurate as on computers; however, there’re several available anti-malware applications and Malwarebytes is one of the best such apps that can scan and remove malware from your smartphone perfectly. Malwarebytes is divided into two sections. The first and main one called App Manager lets you scan apps and programs installed on your smartphone and remove all possible malware. Generally, malware is installed as unwanted applications on your phone, so this section significantly increases accuracy of malware detection on your device.

Another section of Malwarebytes analyzes your overall activities; for example, when you open a website that doesn’t look safe, you’ll get a security warning from this application which informs you malware has been detected on this website. Also, Malwarebytes can detect pop-up apps which are known as forced ads, so if you feel that you’ve been getting unwanted ads on your smartphone recently, I highly recommend you to get help from Malwarebytes and scan your phone.

Finally, to explain Malwarebytes’ performance briefly, I must say that it’s a powerful protection tool which can guarantee your safety by scanning and removing malware, Trojans, etc. which results in increasing speed of your device (compared to when your phone was infected by malware). You can download this quality protection app from the link below.

Although the number of various malware and viruses rises day by day, operating systems developers are doing their best to provide the best protection to users. They regularly release updates to current mobile operating systems and even new improved versions of OS. That`s why it’s good to know that smartphones with newer operating systems  like Huawei Honor 8 that comes with Android 6.0 Marshmallow are pretty safer than devices with lower versions of Android. So always check if your phone’s OS is up to date.

>> Here is my honest review of Huawei Honor 8 equipped to safe Android 6.0 Marshmallow << Android is an open source operating system which increases possibility of being infected by viruses; that’s why antivirus apps are famous among Android users. Antivirus and anti-malware apps became essential for Android phones these days because we all have personal information on our phones and don’t want to lose them! Of course, some people are too cautious and create 16-digit passwords with strange characters even at the news websites. But I recommend you to being moderate. I’m going to introduce 5 best free Android antiviruses that can professionally protect your phone, stay with me!

360 Security antivirus has been downloaded more than 100 million times and received 4.6 points out of 5 from 10 million users, so obviously, it can be considered one of the most powerful and popular Android antiviruses out there. Some features of 360 Security Antivirus include but are not limited to: scanning different types of files, detecting and removing a range of malware, scanning all installed games and apps on the phone, real-time protection mode. 360 Security Antivirus includes some interesting extensions such as Boost which can increase your phone’s speed or Save Battery that keeps your battery charge for longer time. This anti-malware app also lets you lock some parts of your phone to keep people away from your personal data! And finally, do you know what the most interesting thing about 360 Security Antivirus is? All these features are available for FREE.

Get 360 Security Antivirus From Play Store

Most of us probably know simple but powerful Avira Antivirus which was at first released for Windows. The fact is that Avira is a new antivirus for Android users, it’s less known than other Android antiviruses. The main advantage of this antivirus is that got attention of many users is its scanning speed which has significantly increased during recent years.

Avira has all features that I’ve mentioned for Security 360 Antivirus. In addition, it has a great detector called Stagefright which protects you from dangerous risks. Other features like Privacy Policy, Black List and Management Options are available there too. Although Avira Antivirus is a bit heavy when it runs on your smartphone, it doesn’t negatively affect your activities because it doesn’t have to be active all the time and runs only when Stagefright detects some suspicious activities.

If you have problems with running heavy apps on your smartphone or suffer from low speed of your processor, I would recommend you to consider buying Huawei Honor 8 which powerful hardware lets you install and run any application smoothly.

Get Avira Antivirus From Play Store This antivirus has been made for Android OS by Avast. Although Google Play’s stats show that it’s been installed on 100 million devices, it got 4.5 out of 5 from only 4 million users what can’t be satisfactory compared to other antiviruses.

Normal scanning, real-time protection mode, anti-theft feature, ability to lock the phone remotely (if you don’t have access to the phone or it’s been stolen) and updating database on a regular basis are among the features Avast has to offer its users. Avast is the heaviest antivirus among the apps listed here, but you can take advantage of its advanced features like SMS control or locking programs to compensate its huge size.

Get Avira Antivirus From Play Store Several years ago, CM Group, just like GO group, was installed on almost every phone. CM Security maybe isn’t the best Android antivirus in the world, but it’s a suitable choice for people who want to have a stylish antivirus with attractive themes. This antivirus app is lighter than others; it’s also the best app locker which lets no one penetrate the device. The latest update of this antivirus lets you unlock locked apps using the fingerprint sensor of the phone. In total, this antivirus is mostly used for phone security aspects and doesn’t cover security of the Internet or memory card. However, as you can see, it’s been installed more than 100 million times till now and it shows that they’re satisfied with this free Antivirus.

Always update your operating system and use latest version of Android. Also, keep in mind that devices that are equipped to Android 6.0 or 7.0 are more reliable, so if you’re planning to upgrade your phone, choose one of those devices. This is another well-known antivirus. 90% of us have used it in Windows. It was called NOD32 before. Windows version of this antivirus has got attention of many users thanks to its offline update feature and excellent power in detecting and removing viruses, malware, Trojans, etc. However, ESET Company put all its energy into making a quality antivirus for Android devices and it achieved success in 2015 having designed a powerful Android antivirus which we haven`t seen on Android before. ESET Security has all the features we’ve mentioned for other antivirus apps, but the difference is that it’s more powerful than others (or maybe people trust it more!). Free version of this antivirus is good, but if you get its paid version, total security of your smartphone will be guaranteed.

>> Here you`ll find more information and details about Huawei Honor 8 which has Android 6.0 Marshmallow and is considered as one of the safest smartphones <<

Kaspersky Internet Security, AVG AntiVirus Security and Dr Web Security Space are other available quality Android antivirus apps, but we`ve chosen only 5 protection apps because they’re the best in terms of speed, performance and of course people’s opinion. Here you can also see the list of the best free antiviruses for your computer and laptop chosen by experts.

All these antivirus apps were released by companies which are well-known in security field and they are listed in random order. Finally, if you know any other quality Android antivirus app, feel free to share it in comments below which can be useful for others too.