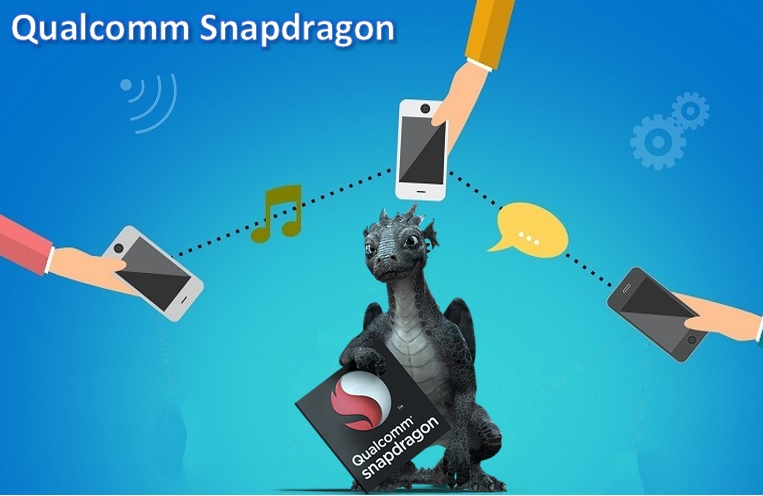 What is Snapdragon 808? A while ago Qualcomm officially released its first series of 64-bit chips (Snapdragon 808 and 810) which benefits of new big.LITTLE architecture designed by ARM company and promised that new flagship smartphones would be equipped to these processors. Continue reading to get familiar with two fiery dragons of Qualcomm, Snapdragon 808 and 810 if you want to learn more about their features and the result of Qualcomm’s efforts.

Although Snapdragon 808 is embedded in new quality phones these days, it was about September 2013 when Apple introduced the new generation of its own processor A7, which was a serious competitor for other manufacturers producing 64-bit mobile processors. Cupertino managers embedded the first 64-bit mobile processor in iPhone 5S which was a great promotion for the flagship as well as threated other competitors.

Each competitor reacted differently to that. Until that time, Samsung had focused on increasing the number of Exynos chips, but after that, announced that they would soon release their own 64-bit processors. MediaTek Inc also mentioned creating 64-bit MT6732 and MT6752 processors in 2014. After a while, NVIDIA released Tegra K1 which was equipped to a 64-bit processor too and Intel also came up with its 64-bit Z3480 processor.

But the most interesting reaction was for Qualcomm! One day after the release of iPhone 5S, marketing director of Qualcomm mentioned that using a 64-bit processor in Apple’s flagship would be impractical and it’s just a marketing trick. He said that generally, 64-bit technology would be beneficial only for heavy software and applications that run on servers, but not for small mobile apps. After a couple of days, Qualcomm’s media manager said that marketing director’s comment was unprofessional and hardware and software industry was going to use 64-bit processors and other companies (it means Qualcomm too, probably!) will soon take advantage of this technology in their products. After a short time, this American company entered 64 bits` world too by introducing Snapdragon 410, 610 and 615.

Snapdragon 808 and 810 are the new members of Qualcomm Snapdragon 800 family and were designed with 20 nanometer architecture. As you might know, Qualcomm had successfully released 32-bit Snapdragon 800, 801 and 805 before and some of these processors were used in flagships of such big companies like Sony, LG, HTC, Nokia, Samsung and etc.

The main difference between Snapdragon 808 and 810 and their elder brothers is using big.LITTLE architecture with cores of Cortex-A57 and A53 as well as 64-bit memory architecture (unlike previous generations of Snapdragon 800). big.LITTLE is an innovation introduced by ARM company. Cores with high processing power which also have more power consumption (generally, Cortex-A15 or A57 cores) are placed beside cores with lower processing and consumption power (mostly Cortex-A7 or A53 cores) so that depending on required processing power, one or both groups or even a combination of powerful processors and low consumption processors will start working simultaneously.

In this case, if tasks can be properly divided between powerful and weak cores with the use of software, a powerful processing with low consumption can be reached what will bring longer life for flagships` batteries and users’ satisfaction.

Also, 64-bit architecture of new Qualcomm Snapdragons helps them use processors able to storage data in 64-bit memory blocks what means that a block or blocks of 64-bit (8 bytes) data will be accessible each time you want to access memory and it means more speed in reading and writing data. In addition, it’s possible to use RAM with more than 4GB in 64-bit architecture while it was limited to maximum of 4GB RAM in 32-bit architecture.

Qualcomm benefited of the highest bandwidth in data transmission to reach the fastest network communication in its new processors. Each data pipe contains 3 channels with 32-bit technology in LTE 64-bit architecture, so instead of 20MHz, output frequency will be 60MHz. This frequency can transmit data with maximum speed of 300 Mbps which is two times faster than common wireless networks and it’s the same as CAT6 cable’s speed. Snapdragon 810 has enough power to record and display 30fps video content with 4K Ultra HD or 120fps with Full HD; it also supports H.265 video codec which is a completely new standard in this field. This processor is equipped to internal encoder and decoder and in addition to producing videos and images with 4096 x 2160 resolution, it can display Ultra HD content with 1.2 Gigapixel speed on mobile, tablet or other devices without pushing on GPU. If the camera sensors manufacturers decide to equip smartphone cameras with 55 megapixels one day, they don’t need to worry about processing power of mobile devices for processing images with 55-megapixel quality.

In addition, if you want to take your phone’s camera against the sun and take a photo of the sunset or if want to take a selfie with a very light background, you don’t need to worry about quality of the photos – they won’t be dark because Snapdragon 808 and 810 benefit of dual 64-bit camera processors to process image signals what lets users take photos with 55-megapixel quality and record HDR videos. Yes, that’s right! There is no mistake – HDR video recording. Dual processors also mean that it can support both cameras at the same time.

Qualcomm used Adreno 430 GPU in Snapdragon 810’s chip and equipped Snapdragon 808’s chip with Adreno 418. The only information we have about these two processors is that Adreno 430 has been designed to display 4K video content which is 30% faster than Adreno 420 that was embedded in Snapdragon 805 as well as 100% more powerful in graphic content processing; it also consumes 20% less power compared to the previous generation.

Snapdragon 810 is the first mobile processor chip in the world that uses LPDDR4 RAM memory. Bus speed of this memory is 1600MHz with 3200MHz frequency and a bandwidth with 25.6 GB/s speed of data transmission. Snapdragon 808 also comes with LPDDR3‌ technology with 933MHz bus speed and 1866MHz frequency with bandwidth that can transmit data with 15 GB/s speed.

Snapdragon 810 and 808 are the most powerful processors from Qualcomm 800 series which support HDMI 1.4, Bluetooth 4.1, USB 3.0 Ports, NFC (Near Field Communication) technology and Qualcomm IZat chip (outlink) for GPS services. Qualcomm promised to make its new quality processors available to smartphone manufacturers in the second half of 2014, so we can expect to see first flagship phones equipped to these two powerful processors from 2015.

As you might know, a weak processor can be one of the main reasons why your phone is running slowly and your tasks can’t be done fast, so purchasing a new smartphone with a faster processor can be definitely a good decision if you’re not satisfied with your phone’s performance.

LG Google Nexus 5X is one of those new quality phones equipped to powerful Snapdragon 808 processor. I strongly recommend this smartphone as it can perfectly handle both light and heavy tasks. So keep in mind that the processor plays a key role in your phone’s performance and you always need to consider it while choosing a new phone.

Since Qualcomm is a business partner of ARM company and is licensed to use ARM’s products and patents, it looks like Snapdragon 808 and 810 can be considered as new cooperation between these two partners and we can expect to see progress in designing and producing mobile processors. We should wait to see when smartphone processors reach a certain level when they can compete with PC processors.